January
$209
February
$203
March
$240
April
$239
May
$189
June
$185
July
$201
August
$191
September
$197
October
$219
November
$231
December
$234
Currently, June is the cheapest month in which you can book a flight to South Australia. Flying to South Australia in March will prove the most costly. There are multiple factors that influence the price of a flight so comparing airlines, departure airports and times can help keep costs down.

When is the best time to fly to South Australia?

$500
$410
$320
$227
June is typically the best time to fly to South Australia, but there are other times where great deals are available. January sees the temperatures in South Australia peak to their warmest. June tends, on average, to see the most amount of rainfall.

When is the best time to book flights to South Australia?

To ensure you get the cheapest price possible for a flight to South Australia, you should look to book at least 60 days in advance of your intended travel date. The price of your flight may increase if you delay and leave booking until a week or so before departure.

Which day is cheapest to fly to South Australia?

The cheapest day to fly to South Australia is usually Wednesday. At the moment, Saturday is the most expensive.

At the moment, flights in the morning are likely to offer the best value for money for your South Australia trip. A flight in the evening will more often than not be of higher cost.

Step into South Australia for a taste of the outback, a drink at the vineyards, a walk through the wetlands and close encounters with animal sanctuaries and wildlife preservations.

Flights to South Australia land travellers in Adelaide, the country’s capital. Here tourists can enrol in surfing classes, swim with the dolphins, tour the National Wine Center and divulge in gourmet cuisine from around the world.

Following a jaunt through the city, tourists can hop local South Australia flights to the outback or take a drive to Kangaroo Island and marvel in the wonders of the Remarkable Rocks. Traveling around South Australia is easy. Several international airlines fly to South Australia daily from one of the capital cities.

Once in South Australia, however, it will be tough to leave. After sipping Shiraz and diving with the dolphins, most travellers are captivated by this remarkable state. And if the wine and sea-life don’t do it, a hug from a koala will surely seal the deal.

The region’s variety of climate zones makes booking flights to South Australia an opportunity to experience all kinds of conditions. In the north the desert prevails, but along the coast the Mediterranean weather takes over, producing warm, dry summers (December to February), and cool, wet winters (June to August). Near Adelaide, the summer months of December, January, and February turn up the heat, and especially inland, temperatures reach 40 degrees, and very little rain falls.

When to fly to South Australia

No matter when you go, planning travel to South Australia rarely disappoints, because weather conditions stay warm and sunny throughout most of the year.

Peak Season: Most vacationers plan flights to South Australia during the long, warm span between October and April, when conditions are mostly dry, and heat skyrockets at the heart of Australian summer.

Off-peak Season: While fewer travellers visit during the rainy season, it’s easier to find great deals on accommodations and cheap flights to South Australia during the winter months of May and August.

Getting around South Australia

Spanning almost four times the size of the United Kingdom, South Australia offers travellers plenty of options for travel around the country. The most popular method of South Australia travel by far is driving. Renting a car is convenient and simple, and offers some of the best views on long journeys across the country. Roads are typically easy to navigate, and you’ll get more sightseeing out of driving than you will on any other form of public transportation.

Limited train service connects Adelaide to other areas within and beyond South Australia’s borders. Schedules and ticketing are available at all major train stations. 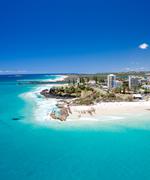