When is the best time to fly to New Brunswick?

is typically the best time to fly to New Brunswick, but there are other times where great deals are available. July sees the temperatures in New Brunswick peak to their warmest. October tends, on average, to see the most amount of rainfall.

Which day is cheapest to fly to New Brunswick?

The cheapest day to fly to New Brunswick is usually Tuesday. At the moment, Wednesday is the most expensive.

To get the best value, try booking a flight in the morning when visiting New Brunswick. Generally the prices will increase for flights at midday as these tend to have higher demand.

New Brunswick is a microcosm of the country so if you do not have the time to see all of Canada, this is a good start. From huge swathes of preserved wilderness that stretch across much of New Brunswick’s interior to lengthy coastlines, water plays a big part in the province’s life – be it in the form of rivers, lakes or the sea.

One of the four founding provinces of Canada, New Brunswick joined Confederation in 1867 and is named after Braunschweig, a city in the north of Germany that is the ancestral home of King George III. The province is officially bilingual though the bulk of the local population is English with a sizeable French minority of about 30 per cent.

Despite its remote feel, New Brunswick was once the destination of choice among wealthy US travellers who saw the area as a perfect getaway for fishing and hunting holidays. The very thing that was once such a strong attraction is still there and visitors come to New Brunswick for the untouched wilderness that is just waiting to be experienced and explored.

New Brunswick features a continental climate though this is tempered along coastal areas where the summers are cooler and winters tend to be warmer. The highest average temperature can be enjoyed in July, which ranges from 22 degrees Celsius on the coast to 25 or so inland. Winter makes its presence most felt in January when the coastal areas dip to -7 degrees though this is made to seem positively balmy in the interior where the mercury can fall as low as -30 C.

When to fly to New Brunswick

The most popular time to visit New Brunswick is undoubtedly during the summer months of June to August when the weather is warm, allowing visitors to take in much of the local scenery in comfort while enjoying many of the outdoor pastimes on offer here, such as hiking, fishing, swimming or sightseeing. This is also the time when the bulk of the area’s festivals take place. However, winter activities such as skiing and snowboarding, snowmobiling as well as snow-shoeing do not come into their own until December.

While the onset of cold weather attracts winter-sport enthusiasts to ski resorts in the inland areas where the temperatures are lowest, many of New Brunswick’s cities experience a drop in visitor numbers, particularly along coastal areas. Early spring can be wet, but as the summer approaches the weather clears and visitors arriving in New Brunswick at this time can often find attractive hotel rates ahead of the onset of high season.

Getting around New Brunswick

By Air: New Brunswick has a number of regional airports of varying size including Moncton, St John, Fredericton and Gagetown making getting around by plane a straightforward affair.

By Road: New Brunswick has a well-developed road network and these are in excellent condition though it is worth remembering that in winter getting around by car can be hazardous. The province can be accessed by road from Quebec, Nova Scotia and Maine. Rental car agencies are standard throughout the province at major airports and cities.

By Train: Fans of rail travel van make use of the VIA Rail service that connects Halifax to Quebec City and Montreal. This line makes several stops in New Brunswick including Sackville, Moncton, Rogesville, Newcastle, Bathurst, Jacquet River, Charlo, Campbellton and Matapedia.

By Bus: Buses operate in New Brunswick on routes as far-reaching as British Columbia on the west coast and various points in the US as well as Quebec and Ontario. 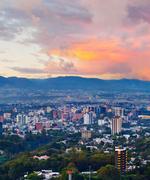