Flights to Coffs Harbour in 2021

January
$208
February
$189
March
$200
April
$204
May
$211
June
$168
July
$229
August
$218
September
$232
October
$183
November
$232
December
$210
At the present moment the cheapest month to fly to Coffs Harbour is currently June; with November being the most expensive. Prices will vary depending on multiple factors such as booking in advance, airline and departure airports and times.

When is the best time to fly to Coffs Harbour?

The best time to fly to Coffs Harbour is during June, but great deals can be found at other times. January tends to be the warmest period in Coffs Harbour so if you are looking for sun or warmer climates then look to fly around this time. March is the wettest if you need to factor this in to your plans.

When is the best time to book a flight to Coffs Harbour?

The price you pay for your flight to Coffs Harbour may vary depending on when you book. For the best chance of a lower fare, look to book 61 days in advance of your trip. Fares are likely to increase a fortnight or so before your departure date.

Which day is cheapest to fly to Coffs Harbour?

The cheapest flights to Coffs Harbour are usually found when departing on a Wednesday. The departure day with the highest cost at present is Saturday.

What time of day is cheapest to fly to Coffs Harbour?

At the moment, flights in the morning are likely to offer the best value for money for your Coffs Harbour trip. A flight in the evening will more often than not be of higher cost.

Coffs Harbour is a regional coastal city located halfway between Sydney and Brisbane. Visitors have been booking flights to Coffs Harbour for decades because it’s one of the original beach destinations and blessed with Australia’s most liveable climate, being near national parks, reserves and forests there is plenty for tourists to explore.

The school holidays during December to late January, are a high season for the beaches. Whale lovers tend to book flights to Coffs Harbour during the Whale-watching season which runs from June to November.

May to August is low season in Coffs Harbour and the cheapest time to book flights, however, events such as the Coffs Harbour Gold Cup Day bring a day of fun and festivities to the colder winter months. Thousands look forward to dressing up to watch the horse racing which has 8 races held throughout the day and to enjoy the delicious food and drink on offer.

September to December, February and March are shoulder season months when Coffs Harbour is not as busy with tourists; so this is a great time to get cheap flights to Coffs Harbour. Crowds may be larger than usual in September due to locals and travellers attending The International Buskers and Comedy Festival. The festival lasts over six days and is filled with laughter and happiness spread out over 15 different venues. There is a variety of family entertainment and evening entertainment usually on offer from artists locally and further afield.

Coffs Harbour has bananas (and a trend-setting Big Banana), beautiful beaches, national parks and lots of childhood memories. Many holidaymakers who once played on these beaches – and ate chocolate-covered bananas at the Big Banana – enjoy cheap flights to Coffs Harbour so their own families can experience some wonderful memories.

The beaches, starting from the south are Boambee Beach, Jetty Beach (close to the marina) and Park Beach, the main beach on Ocean Parade. Should you tire of making sand castles, there are plenty of activities including scuba diving or surf rafting, fishing or whale watching or bush walking.

There is a boardwalk close to the jetty area and 19 hectares of lush, botanical gardens close by. Another Coffs Harbour institution is the Coffs Harbour Butterfly House, which is home to a large variety Australian butterflies and opened 7 days a week and most of the year.

Off the coast, Muttonbird Island, part of the Solitary Islands Marine Park, is popular with bird watchers, whale watchers and scuba divers.

Getting around Coffs Harbour

If you’re not renting a car to get around, there are several bus services such as Busways, Ryans and Sawtell Coaches, which operate daily services. Taxis are readily available. 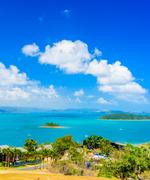 Other local departures to Coffs Harbour from Australia