When is the best time to fly to Broken Hill?

Flying to Broken Hill in March is usually considered the best time to fly. However, you will find other deals are always available year round. January tends to be the warmest period in Broken Hill so if you are looking for sun or warmer climates then look to fly around this time. December is the wettest if you need to factor this in to your plans.

Which day is cheapest to fly to Broken Hill?

Thursday is currently, on average, the cheapest day to fly to Broken Hill. Flying on Friday will result in higher flight prices.

What time of day is cheapest to fly to Broken Hill?

At the moment, flights in the afternoon are likely to offer the best value for money for your Broken Hill trip. A flight in the morning will more often than not be of higher cost.

Broken Hill’s high tourist season generally begins mid to late March and runs until the end of October, where a lot of tourists book flights. Peak periods during this time are the school holidays, which occur during April, July and September/October. Other times when Broken Hill becomes popular is during its many events. One such example is the annual Silver City Show, taking place in September, which is a real country affair for the whole family. Enjoy a day jam-packed with events and activities, such as arts and crafts, rides, food stalls, the museum of ‘days gone by’, an animal nursery and fireworks. If you take a flight to Broken Hill during late October, be sure not to miss the Silver City Cup. First held in 1899, this is the oldest horse race in the region and it attracts thousands of people every year. Taking place at St Patricks Race Club, the event also has a whole host of entertainment for the entire family.

November to February, when the sun can be scorching hot, is in general, the low season. If you’re happier spending your holiday admiring the art in the numerous art galleries than this is a good time to book some cheap flights to Broken Hill.

Broke Hill’s mining history stretches back to the latter years of the 19th century; BHP Billiton, the world’s largest mining company, has roots in the town. Broken Hill itself was founded in 1883 and several of its street names were inspired by the minerals and resources that were found there – Argent, Chloride, Sulphide and Cobalt for example.

At the edge of the Central Business District, on top of 7.3km Line of Lode is the Miner’s Memorial, which commemorates the hundreds of workers who died while working the mine.

Within an hour’s drive of Broken Hill are Silverton (the setting of several movies including Mad Max and Adventures of Priscilla, Queen of the Desert), Kinchega National Park and the Menindee Lakes.

This mix of art and history is why tourists keep booking flights to Broken Hill.

Broken Hill has a hot desert climate, where the summer months are mostly dry and hot and the winter months are relatively cool and dry. During summer the average maximum temperature is 32 degrees Celsius, whilst the average minimum temperature is 14 degrees making it an ideal time to take a flight to Broken Hill and enjoy the summer break.  Winter temperatures are generally between the teens and 5 degrees. Spring and autumn temperatures hover around the 20-25 degree mark. Dust storms are no longer a problem in the city thanks to a green reserve that circles the town.

Getting around Broken Hill

Broken Hill Airport (BHQ) is located 6km south of the town. Rental cars and taxis are available at the airport, but is advised to book the rental car in advance, you may find a cheap deal when you book your flight to Broken Hill.

A rental car is best for touring around the region but there are companies that offer sight-seeing tours of Broken Hill. 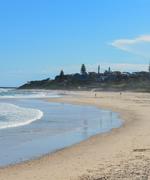 Cheap tickets to Broken Hill found by our users in Australia

Other local departures to Broken Hill