Flights to Wagga Wagga in 2021

The cheapest ticket to Wagga Wagga found for each month in 2021 based on historical flight searches by Cheapflights users.

When is the best time to fly to Wagga Wagga?

Whilst there are several times of the year to choose from, June is seen as the time to fly to Wagga Wagga, however, it is possible to get good deals throughout the year. January sees the temperatures in Wagga Wagga peak to their warmest. June tends, on average, to see the most amount of rainfall.

When is the best time to book a flight to Wagga Wagga?

The best time to book flights to Wagga Wagga is 54 days before your desired departure date. The cost of your flight will likely increase significantly if you book two weeks in advance of your flight.

Which day is cheapest to fly to Wagga Wagga?

Monday is currently, on average, the cheapest day to fly to Wagga Wagga. Flying on Wednesday will result in higher flight prices.

What time of day is cheapest to fly to Wagga Wagga?

Flights in the morning are typically the cheapest time of the day to fly to Wagga Wagga. Flights in the evening are usually the most expensive.

Wagga Wagga is a defence and university town and families book flights out to attend passing-out parades and graduation ceremonies. Peak season times are Christmas and New Year and the school holidays that run to the end of January. Easter and all the long weekends are also high season times.

Wagga Wagga hosts more than 400 festivals during the year which travellers are constantly booking flights to. The Food and Wine Festival takes place in March and has entertainment to keep the whole family happy throughout the day. Guests can sample over 100 different types of food and can wash it down with a choice of 200 wines as well as a selection of beers and cocktails.  The annual event attracts around 7,000 individuals each year so Wagga Wagga will experience larger crowds than normal during this festival. Further events are also taking place such as the Gold Cup Racing Carnival in May, the Veteran and Vintage Motor Clubs Annual Rally in June, and the Jazz and Blues Festival in September. Henty Field Days, a three-day exhibition of agricultural machinery, also takes place in September and the Wagga Wagga Agricultural Show is held at the end of September/start of October.

Due to the university, training base, RAAF and festivals, Wagga Wagga does not have a low season. It is recommended to book flights in advance to find the best deals.

The location of the Kapooka Army Recruit Training Base, Royal Australian Air Force Base and Charles Sturt University means that there’s strong demand for cheap flights to Wagga Wagga all year long.

There’s also great demand from the fans of the elite sportsmen and sportswomen who have been inducted into the Sporting Hall of Fame. So great is Wagga Wagga’s sporting prowess that it is known as the City of Good Sports and a term – the Wagga Effect – has been coined to explain how the town (and regional towns like it) has produced such an impressive honour roll of athletes.

Wagga Wagga is the largest inland city in New South Wales and capital of the Riverina region. It’s a pleasant city, situated on the banks of the Murrumbidgee River. Along with lush parks and gardens, museums (Riverina and RAAF) and galleries, it even has a beach, with a wave that rushes along at five o’clock each day. Museums and galleries are plentiful. The RAAF Museum tells the story of Air Force history, the Wagga Wagga Art Gallery is a public art space and the Australian Pen Museum is the country’s only museum dedicated to writing implements.

It’s also a great launchpad for further exploration around the Riverina. The Snowy Mountains lie east of Wagga Wagga, Griffith, the wine-producing region, lies to the west.

The Riverina region is known as the pump-house of the state’s wine industry. Charles Sturt University’s wine school and the Ron Potter Research Centre are based here and there are plenty of cellar doors that you can visit to pick up some goodies.

The climate is temperate with four distinct seasons. Winters are cold with temperatures dropping to the single digits while summertime temperatures can soar to 32 degrees.

Getting around Wagga Wagga

A car is essential if you’re going to explore the Riverina area. Busabout Wagga Wagga services operate throughout the city area with extensions to Estella and Forest Hill.

Once the flight arrives at Wagga Wagga Airport (WGA), there are several rental-car companies. Airport shuttle buses and taxis are available too. A taxi ride into Wagga Wagga takes about 15 minutes.

What airport do you fly into for flights to Wagga Wagga?

Cheap flights to Wagga Wagga in May, June 2021

The best prices found for WGA flights for May, June

Cheap flights to Wagga Wagga found for this year

See alternative destinations where airfare is generally forecast to be close to Wagga Wagga flight prices. 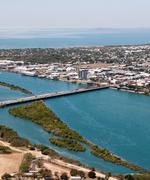 Cheap tickets to Wagga Wagga found by our users in Australia as recently as May 17, 2021.

Other local departures to Wagga Wagga from Australia

Not set on Wagga Wagga? See the cheapest flights to Australia. Airfare prices updated on May 17, 2021.