The best prices found for DUB flights for July, August

Cheap flights to Dublin found for this year

Late deals on return flights to Dublin, departing today and this week

The cheapest ticket to Dublin found for each month in 2021 based on historical flight searches by Cheapflights users.

When is the best time to fly to Dublin?

Average Dublin flight ticket prices and weather conditions for 2021 and 2022 by month.

October is typically the best time to fly to Dublin, but there are other times where great deals are available. July tends to be the warmest period in Dublin so if you are looking for sun or warmer climates then look to fly around this time. October is the wettest if you need to factor this in to your plans.

When is the best time to book a flight to Dublin?

To ensure you get the cheapest price possible for a flight to Dublin, you should look to book at least 53 days in advance of your intended travel date. The price of your flight may increase if you delay and leave booking until a week or so before departure.

Which day is cheapest to fly to Dublin?

Monday is currently, on average, the cheapest day to fly to Dublin. Flying on Saturday will result in higher flight prices.

What time of day is cheapest to fly to Dublin?

To get the best value, try booking a flight at midday when visiting Dublin. Generally the prices will increase for flights in the morning as these tend to have higher demand.

When is the best time to fly?

There are a couple of peak seasons when most tourists decide to take a flight to Dublin. Summers and school holidays are very crowded, as are Christmas and New Year.

St Patrick’s Day, on the 17th March, is the day to embrace all things Irish and green and what place better to do this than Dublin, Irelands’ capital city. Watch an array of performers during the parade and continue the celebrations during a five day festival which includes concerts, exhibitions, street theatre and fireworks. Expect bars and pubs to be packed at all times. St. Patrick’s is an exceptionally busy time. Book in advance to ensure you get the best possible deals for accommodation and your flights to Dublin.

The Dublin Fringe Festival, during September, provides a platform for new as well as veteran companies who want to try out new material. Expect the unusual from this festival, not only from the performances but also from the venues. Previous performances have taken place in parked cars or even the city’s public toilets!

Take a flight in the summer months, from June to August, enjoy the great outdoors accompanied by the cool sounds of jazz or a thought-provoking story told through opera. These free open-air concerts and recitals are at various venues throughout the city.

The off season is mid-November through mid-March or Easter with the exception of Christmas/New Year. You will find an array of cheap flights to Dublin during these months, but fewer attractions and restaurants are open.

Autumn (September to November) and spring (March to May) are good times to visit Dublin. The seasonal hotels and restaurants open in the spring and usually do not close until November. There are often good deals on accommodation and flights to Dublin to encourage tourism.

Ireland’s capital city is vibrant and cosmopolitan. What gives Dublin added oomph is the spirit of its people. It may be a modern city of glass and steel, a favourite with business people, conference goers and tourists, but Dubliners remain friendly and plain-speaking.

Dublin’s streets are Georgian and elegant with shopping districts of Grafton Street, south of the Liffey and Henry Street on the north. The city offers a wide variety of theatre, art, and music venues, and there’s no shortage of high-quality pubs and restaurants. As you explore the city, take in all the richness of its culture, including the beauty, wit, historical sorrow, and unflagging energy.

The Irish have a deep respect for their past. The city’s sights include the Chester Beatty Library, Christ Church Cathedral, Marsh’s Library, Dublin Castle, the Parnell Museum, Kilmainham Gaol, Francis Bacon’s studio and, of course, the Guinness brewery at St. James’s Gate where the black stuff has been produced for more than 250 years as well as the Book of Kells, an illuminated manuscript of the Gospels, which dates from the 9th century, and can be viewed in Trinity College Library.

Take a flight to Dublin and see the city’s cathedrals, including St. Patrick’s, which is the largest church in Ireland. The Dublin Writers Museum will introduce you to famous Irish authors, and Dublin Castle will give you access to majestic government buildings, gardens, museums, and the historic library.

Dublin tends to have mild weather throughout the year; in general, winter isn’t brutally cold, and summer isn’t marked by scorching temperatures. July and August see the most visitors, so if you want to enjoy pleasant outdoor weather, while avoiding all the crowds, try visiting in May, June, or September. Flights may be cheaper during these periods.

Between public transport, taxis and your own two feet, the city is easy to get around. Walking is the best option in the centre of town. If you get tired, you can always hop aboard the light rail, LUAS, which has two lines accessing the main attractions. The bus network is also a great way to get around. It covers the city and has a small Nitelink service as well. To get out to the suburbs and seaside towns, the rapid transit train, DART, is the way to go.

Taxis are abundant, but fill up quickly on nights and weekends. Driving in the city can be very frustrating. All the traffic and parking problems, combined with expensive car rental rates, make it not really worth your time. If you want to rent a bike to get around, there are plenty of bike lanes around Dublin, but heavy traffic and few bike rental shops around make it less than ideal.

What airport do you fly into for flights to Dublin?

Booking a flight to Dublin (DUB) is your only option if you intend on flying to Dublin. It is only a 9.2 km journey from Dublin to Dublin’s city centre.

See alternative destinations where airfare is generally forecast to be close to Dublin flight prices. 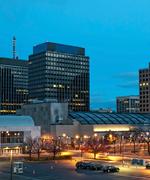 Cheap tickets to Dublin found by our users in Australia as recently as July 27, 2021.

Other local departures to Dublin from Australia

Not set on Dublin? See the cheapest flights to Australia. Airfare prices updated on July 27, 2021.