January
$594
February
$473
March
$448
April
$590
May
$437
June
$561
July
$489
August
$481
September
$498
October
$494
November
$478
December
$837
At the present moment the cheapest month to fly to Chengdu is currently May; with December being the most expensive. Prices will vary depending on multiple factors such as booking in advance, airline and departure airports and times.

When is the best time to fly to Chengdu?

The best time to fly to Chengdu is during May, but great deals can be found at other times. If you are looking for warm weather when you arrive off of your flight to Chengdu then July is statistically the hottest. August is historically the period with most rainfall.

When is the best time to book a flight to Chengdu?

The price you pay for your flight to Chengdu may vary depending on when you book. For the best chance of a lower fare, look to book 43 days in advance of your trip. Fares are likely to increase a fortnight or so before your departure date.

Which day is cheapest to fly to Chengdu?

Monday is currently, on average, the cheapest day to fly to Chengdu. Flying on Thursday will result in higher flight prices.

What time of day is cheapest to fly to Chengdu?

To get the best value, try booking a flight in the afternoon when visiting Chengdu. Generally the prices will increase for flights in the evening as these tend to have higher demand.

Chengdu is generally mild and humid, although the climate is monsoon-influenced which means the city does experiences some rainfall.

Winter, from December through February, sees temperature in the single digits, going up to just over 10 degrees Celsius. This can be a pleasant time to visit. If you don`t mind the cold then you can find cheap flights to Chengdu, as these are the months with the least rainfall.

The summer months of June to August experience temperatures up to the high 20s and an increase in rainfall, particularly in July. These conditions can be off putting for some tourists and you should keep the weather in mind when packing.

In terms of the weather, the ideal times to visit the city are from March to May and September to November. Temperatures are much more pleasant during these months, ranging from just under 10 degrees to the mid-20s and although there is some rain, particularly in May and September, it is significantly less than in the summer.

If you wish to experience Chengdu during the magical atmosphere of one of its festivals, then you will be spoilt for choice, as a number of events take place all through the year. The Lantern Festival officially ends the Lunar New Year celebrations, with a bright and colourful display of lanterns which illuminate parks, as well as traditional folk dancing and acrobatic performances. Around a million visitors descend onto the city for this celebration which takes place around January/February. Finding cheap flights to Chengdu for this period might be difficult. A number of other festivals also take place which are focused on beautiful flowers. This includes the Chengdu International Peach Blossom Festival (March), Xindu Lotus Festival (June/August) and Tianpeng Peony Fair (April).

The capital of the Sichuan province and one of China’s most populous cities, Chengdu has a remarkably laid-back atmosphere considering its size. Although the centre of the city is a continuous hive of activity, Chengdu is often referred to as the ‘Land of Milk and Honey’, due to its wealth of green spaces and agricultural heritage. Indeed, the city is located on the edge of the richly fertile plains of the Sichuan Red Basin.

With Sichuan being one of only three provinces in China where pandas can be found in the wild, many visitors take cheap flights to Chengdu just to encounter the world’s most adored animal species. Located just a short distance from the city centre, the Giant Panda Research Base is one of the most popular tourist attractions in the area. Home to over 50 giant pandas, the base is best visited during the morning as this is the time when the inhabitants are most active. Back in the centre of the city, there are a number of attractions which appeal to those who have an interest in Chinese history. The Wenshu Temple is the largest Buddhist place of worship in the city and enjoys a serene atmosphere all of its own. This wonderfully peaceful temple is situated in one of the city’s older neighbourhoods, featuring narrow streets which are lined with shops, food stalls and tea-houses.

To experience the more modern side of the city, the place to head for is Chunxi Road. This vibrant area is home to a wealth of brand name stores, cinemas and restaurants serving all manner of international cuisine.

Like most major cities in China, the roads in Chengdu are often incredibly busy. The network of buses in the city is extensive and exact fares are required to board as change is not given. As with the airport, taxis in the city are either green or blue but be aware that most of the drivers do not speak English.

Chengdu Shuangliu International Airport (CTU) is one of the busiest airports in China and is located approximately 20 km from the city centre. If you fly to Chengdu Airport an express bus service leaves from outside the main terminal building at regular intervals throughout the day. Official taxis are either coloured green and yellow or blue and yellow and are all metered. 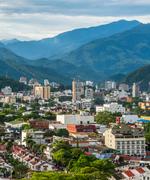 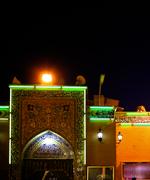 Other local departures to Chengdu from Australia