Flights to Toulouse in 2021

The cheapest ticket to Toulouse found for each month in 2021 based on historical flight searches by Cheapflights users.

When is the best time to fly to Toulouse?

Average Toulouse Blagnac flight ticket prices and weather conditions for 2021 and 2022 by month.

Whilst there are several times of the year to choose from, January is seen as the time to fly to Toulouse, however, it is possible to get good deals throughout the year. July tends to be the warmest period in Toulouse so if you are looking for sun or warmer climates then look to fly around this time. May is the wettest if you need to factor this in to your plans.

When is the best time to book a flight to Toulouse?

To ensure you get the cheapest price possible for a flight to Toulouse, you should look to book at least 1 days in advance of your intended travel date. The price of your flight may increase if you delay and leave booking until a week or so before departure.

Which day is cheapest to fly to Toulouse?

The cheapest day to fly to Toulouse is usually Tuesday. At the moment, Wednesday is the most expensive.

What time of day is cheapest to fly to Toulouse?

Flights at midday are typically the cheapest time of the day to fly to Toulouse. Flights in the evening are usually the most expensive.

Toulouse has a temperate climate, with temperatures varying as the seasons change. The hottest months are from June to August, when temperatures are usually in the 20s. This is a popular time to visit Toulouse, as the warmth kicks in and people take advantage of this by spending most of their holiday outdoors.

November through March are the coldest and rainiest months, with temperatures on average in the single digits, although March can see temperatures increase to around 14 degrees. Due to the weather, this time is less popular in terms of tourism and flights are cheaper. Therefore, if you’re looking to save money on your trip, this could be a good time to look. Although this may be the low season, the Christmas and New Year period can still see lots of people travelling to Toulouse. If you wish to join in the festive spirit, be sure to head to the famous Place du Capitole, where the Christmas market is held every December. Browse the many stalls, while sampling traditional grilled chestnuts and sipping on a warm mulled wine.

Whatever month you plan to fly to Toulouse, you’re sure to come across one of the many events and festivals which take place in the city. One such example is the Toulouse Summer Festival, which showcases a diverse programme from classical to rock and jazz to worldwide music. The event takes place in a variety of venues, from July to August.

Toulouse appeals to all five senses: between the colours and textures of bright flowers, the scent and taste of local fare, and the sounds of the French language, you’ll be overcome by a rush of influence. Its location between the Atlantic and the Mediterranean and its role as the gateway to the Pyrenees mountain range is just another one of its outstanding features. The old capital of Languedoc, France’s fourth largest city, and the metropolis known as “La Ville en Rose” (City in Pink) keeps tourists flooding Toulouse time after time.

Aside from the many attractive tourist sites, Toulouse is also known for its proficiency in the aero-space industry. The Toulouse Space Centre is headquartered here, driving in companies such as the Airbus and Aerospatiale. Steeped in aviation history, Toulouse is both the landmark of the first regular airline taking off of French soil, and also the birthplace of Clement Adler, the ‘Father of Aviation’. Despite its progression in the sky, Toulouse somehow managed to miss the Industrial Revolution of the 19th century, and has since been known as a sleepy, historical town balanced by universities and growth. Throughout the area are more than 300 different types of organs awaiting your arrival during the Annual Organ Festival.

Toulouse has an extensive public transport network of buses, tramways and metro. There is also an abundance of taxi companies available. If you would rather hire a car, bear in mind that downtown area tends to be very busy and parking could be tricky – it might be better to rent a bicycle and explore the city at ease.

The majority of travellers to Toulouse will arrive at Toulouse-Glagnac Airport (TLS), which is located just over 4 miles (6 km) northwest of the city.

What airport do you fly into for flights to Toulouse?

Travellers will need to book flights to Blagnac (TLS) if they wish to fly to Toulouse. The Toulouse airport is 7.0 km from the city centre.

See alternative destinations where airfare is generally forecast to be close to Toulouse flight prices. 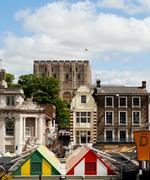 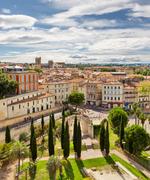 Cheap tickets to Toulouse found by our users in Australia as recently as June 15, 2021.

Other local departures to Toulouse from Australia

Not set on Toulouse? See the cheapest flights to Australia. Airfare prices updated on June 15, 2021.