When is the best time to fly to Yokohama?

$1,650
$1,350
$1,050
$750
The best time to fly to Yokohama is during June, but great deals can be found at other times. August tends to be the warmest period in Yokohama so if you are looking for sun or warmer climates then look to fly around this time. October is the wettest if you need to factor this in to your plans.

When is the best time to book flights to Yokohama?

The price you pay for your flight to Yokohama may vary depending on when you book. For the best chance of a lower fare, look to book 60 days in advance of your trip. Fares are likely to increase a fortnight or so before your departure date.

Which day is cheapest to fly to Yokohama?

Tuesday is currently, on average, the cheapest day to fly to Yokohama. Flying on Friday will result in higher flight prices.

To get the best value, try booking a flight in the afternoon when visiting Yokohama. Generally the prices will increase for flights at midday as these tend to have higher demand.

The second most populous city in Japan after its close neighbour Tokyo, Yokohama is unashamedly tourist-centric. A maritime city with a rich legacy, Yokohama seamlessly blends traditional Japanese culture with a host of modern cosmopolitan touches such as first-class international eating establishments, cool jazz clubs and a wealth of local microbreweries. The main hub of the city is Minato Mirai, a vast urban area with an enviable waterfront location. Its name meaning ‘harbour of the future’, Minato Mirai is home to an extensive selection of major retail stores, modern hotels, fascinating museums and even an amusement park. Cosmo World boasts a selection of roller coaster rides and carnival attractions but is undoubtedly most famous for the huge Cosmo Ferris Wheel which dominates the city skyline alongside the iconic Landmark Tower.

Much of the city was devastated by an earthquake in 1923, meaning that the majority of Yokohama’s historic buildings have been lost forever. However, it is still possible to get a taste of traditional Japanese historic culture here. The beautiful gardens of Sankei-en are a true oasis of peace and tranquillity, offering an escape from the bustle of the city. In addition to intricately landscaped grounds, Sankei-en is one of the few locations in the city where historic structures can still be found; a 500-year old pagoda being the prime example. In complete contrast to the calm of Sankei-en, the city’s Chinatown area, the largest of its type in the whole of Japan, is a constant hive of activity and features all the sights and sounds that you would normally associate with Hong Kong.

When to fly to Yokohama

The months of March to May and September through to November are the ideal times to visit the city. During these periods, the weather is still very pleasant and conditions are not as humid as those which are prevalent during the months of June, July and August .The colder months of January and February are the cheapest times to visit Yokohama. Tourist numbers are generally lower during these months, so the city tends to be less crowded.

The most effective way of travelling around the city of Yokohama is by the subway train. The Minato Mirai subway line travels to most of the major tourist destinations. In the harbour area of the city, there is a plentiful selection of velo taxis for hire, while in Chinatown the most popular method of travel is the rickshaw. 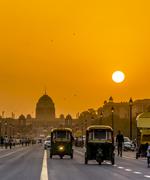 Prices found by our users for local departures to Yokohama