When is the best time to fly to Wroclaw?

June, July and August bring pleasantly warm temperatures to the city and is when most travellers will book their flights to Wroclaw. In July, there is the added attraction of the New Horizons film festival, rated as the most important in Poland.

The cooler shoulder seasons of March to May and September to November are the perfect time for walking around the city and can also be the best time to search for cheap flights to Wroclaw. As well as summer, Wroclaw hosts a fruitful calendar of events throughout the year to keep visitors entertained during their holiday. The Festival of Good Beer takes place on the second weekend in May and lasts for three days (Friday, Saturday, and Sunday) and provides revellers with the opportunity to try hundreds of beers from various breweries across Europe. In October, there is the Dialog Festival of international theatre and a classical music festival called Wratislavia Cantans, which uses some of the city’s most historic buildings.

When is the best time to book flights to Wroclaw?

The best time to book flights to Wroclaw is 27 days before your desired departure date. The cost of your flight will likely increase significantly if you book two weeks in advance of your flight.

Which day is cheapest to fly to Wroclaw?

Monday is currently, on average, the cheapest day to fly to Wroclaw. Flying on Friday will result in higher flight prices.

Flights in the evening are typically the cheapest time of the day to fly to Wroclaw. Flights in the morning are usually the most expensive.

Wroclaw is on the Oder River and it is the largest city in western Poland. Travellers flock on flights to Wroclaw to enjoy its many attractions which range from historic buildings to a vibrant nightlife scene. The old town, or Stare Miasto, was rebuilt after the Second World War and it is home to most of the main tourist attractions. The bustling Rynek, the central square, is one of the largest in Europe and has many cafes and bars. Nearby, visitors can climb the 90m tower of St Elizabeth’s Church to enjoy spectacular views over the city. The Town Hall, on the Rynek, has a spectacular Gothic interior. On the Oder River, the modernist Centennial Hall is the work of the architect Max Berg, and is now a UNESCO World Heritage site. The historic streets of Ostrów Tumski, the islands on the Oder River, are best walked in the early evening to enjoy their mysterious atmosphere, lit by oil-fired lamps. The Sky Tower, just outside the city centre, has a high speed lift to the 45th floor for views of the city and beyond. The city’s Japanese Garden was opened for the World Expo of 1913 and has been restored to its former splendour. Wroclaw’s most-visited museum is the Panorama Raclawicka which has one exhibit: a spectacular panorama of an 18th century battle between Russian and Polish troops. The National Museum has an important collection of Polish art, while the Wroc?aw Contemporary Museum is in an unusual setting: a World War Two air raid shelter. One unusual feature of Wroclaw is a collection of over 250 dwarf statues commemorating the Orange Alternative protest movement which started in Wroclaw in the 1980s. The bronze figurines are located in the most unusual locations around the city.

Wroclaw is a compact city and it is easy to see all of the sights on foot. However, public transport systems are excellent, with an efficient bus service and an ultra-modern tram network. There are many bicycle paths, and a public bike rental system.

Wroclaw Nicolaus Copernicus Airport (WRO) serves flights to Wroclaw and is located 6 miles (10km) from the city centre. A bus service runs directly from the terminal building into the centre of Wroclaw every 20 minutes. This bus ride takes around 30 minutes, depending on traffic. Taxis are available outside the terminal building and the journey time is about 15 minutes, depending on traffic. Car rental is available at the airport. 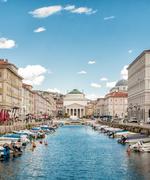 Prices found by our users for local departures to Wroclaw

Other local departures to Wroclaw