When is the best time to fly to Incheon?

The best time to fly to Incheon is during March, but great deals can be found at other times. August sees the temperatures in Incheon peak to their warmest. July tends, on average, to see the most amount of rainfall.

When is the best time to book a flight to Incheon?

The best time to book flights to Incheon is 58 days before your desired departure date. The cost of your flight will likely increase significantly if you book two weeks in advance of your flight.

Which day is cheapest to fly to Incheon?

Tuesday is currently, on average, the cheapest day to fly to Incheon. Flying on Saturday will result in higher flight prices.

What time of day is cheapest to fly to Incheon?

To get the best value, try booking a flight in the evening when visiting Incheon. Generally the prices will increase for flights in the morning as these tend to have higher demand.

Incheon has four distinct seasons which usually play a part in when people decide to book a flight to Incheon for a visit. Winter, from December to February, is mostly cold and dry, with icy patches and occasional snow. Cooler days are interspersed with sunnier ones which makes winter quite tolerable. The under-floor heating (called ondol) is a bonus of winter, which makes the floors lovely and warm.

Spring, March through May, is marked by beautiful flowers coming into bloom. Starting out cool and sometimes wet, this season gradually warms up. This is a lovely time to book flights but keep in mind the possibility of yellow dust which can pick up across the city. Summer, from June through to August, is relatively hot and humid, with the monsoon season picking up around the end of June through to late July. Many cheap flights to Incheon become available during the month of August, but the reason for this is heavy rainfall. These conditions can make sightseeing hard so puts off some travellers.

Autumn, September to November, is probably the best time to book a flight to Incheon. The weather is cooler but still warm and sunny and there is less rainfall. This time of the year is when Koreans celebrate Chuseok, Korean Thanksgiving. This is characterised by market stalls selling, sweet apples, the unique Korean pear and huge purple grapes. The smell of roasting chestnuts and gingko nuts also fills the air.

The port city of Incheon is typically the average visitor’s first introduction to South Korea. Home to the country’s main international airport, Incheon greets visitors by showing off what a modern country South Korea has become. With one of the world’s top-rated airports, one of the country’s largest underground shopping arcades and an attractive waterfront bursting with entertainment and dining options, Incheon sets the tone for an enjoyable vacation in South Korea.

Many visitors to the city will find themselves in the neighbourhood of Bupyeong, where a flurry of restaurants, bars and the aforementioned underground shopping arcade offer unlimited ways to spend a day enjoying modern Korean culture. Another popular destination is the Arts Centre District, home to performance venues, department stores, designer boutiques and restaurants.

Other gems abound, too. Incheon is home to the country’s only official Chinatown, and the neighbouring Liberty Park and its statue of General MacArthur commemorate the history of Korea-U.S. relations. Also worth a visit is Independence Memorial Hall, a tribute to South Korea’s liberation from Japan.

Fun and frolic await at the island of Wolmido, where the waterfront beckons with amusement park rides, carnival games and seafood restaurants. Several other nearby islands offer hiking and nature walks, a contrasting experience to that which travellers find in the metropolis of Incheon.

Incheon has an extensive public transportation system that makes it easy to travel throughout the city. The underground subway system avoids the city’s traffic and is easily navigated by tourists. Kiosks sell transportation cards that can be loaded with credits and used for transfers between the metro and bus systems. Blue buses run between Incheon’s various districts, while small green buses stay within neighbourhoods. Taxis are also plentiful and can be hailed from most streets. Meter use is standard, and taxi fare can be paid for with cash or, in many cases, a credit card.

Getting to the city

Incheon International Airport (ICN) is located on Yeongjong Island, just off the coast of Incheon proper. Flight travellers appreciate that the airport is well-connected to the city via several transit options, the most popular of which are the express airport buses. These buses run on regular intervals along routes throughout Incheon and beyond. Express airport buses are also one of the more affordable transit options at Incheon International Airport. Taxis are also available, though travellers should make sure their drivers use the meters at all times. 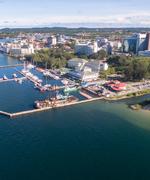 Other local departures to Incheon from Australia