When is the best time to fly to Oranjestad?

$3,800
$3,110
$2,420
$1,727
January is typically the best time to fly to Oranjestad, but there are other times where great deals are available. August tends to be the warmest period in Oranjestad so if you are looking for sun or warmer climates then look to fly around this time. November is the wettest if you need to factor this in to your plans.

Which day is cheapest to fly to Oranjestad?

Thursday is currently, on average, the cheapest day to fly to Oranjestad. Flying on Monday will result in higher flight prices.

At the moment, there are flights only in the morning for your Oranjestad trip.

When is the best and cheapest time to visit Oranjestad?

If it’s perfect weather you’re looking for, then Oranjestad is a great destination at any time of the year. The best and by far the cheapest time to visit Oranjestad is from around April to August. During this time the weather is lovely but this is considered the off-peak season where tour operators, hotels and airlines lower their prices. Also, as school term time falls within a few of these months, you could get an even better deal.

A popular destination amongst families, couples, honeymooners and large groups of friends, the city of Oranjestad has something special to offer every type of traveller. The beautiful climate, stunning harbour and charming city centre are just some of the reasons why so many return here, but we think it’s Oranjestad’s laid-back island attitude that so many visitors can’t resist.

A perfect destination for shopaholics, Oranjestad boasts a fantastic array of luxury boutiques and traditional markets where you can pick up anything from locally made crafts to designer handbags. After a few hours of retail therapy, head to the centre for a pleasant stroll amongst Oranjestad’s colourful buildings before moving to one of the restaurants perched on the water’s edge. Here you can sample a selection of fresh seafood cooked the traditional Caribbean way.

If it’s culture you’re after, then make your way to Fort Zoutman. This fantastic site captures Oranjestad’s historical past beautifully, and is also the perfect place to be to catch an authentic Caribbean performance at the weekly Bon Bini Festival. The Museo Arubano is also a surprisingly lovely museum, with collections dedicated entirely to Aruban history.

Finally, no trip to Oranjestad would be complete without a trip to the beach. Both Eagle Beach and Palm Beach are considered among the best on the island. Not only are they both ideal sunbathing spots, but they also offer some fantastic water sports like surfing, snorkelling and scuba diving. In many ways, Oranjestad is the perfect island resort.

Getting around Oranjestad on foot can be fairly pleasant but if you wish you can take advantage of a local car rental or taxi. Buses are also very frequent. If you want to travel a little differently when in Oranjestad, hire a motorcycle or quad. Or, take a ride on the charming new tram system installed in the city centre.

How do you get to the city from the airport?

All flights to Oranjestad land in the Queen Beatrix International Airport (AUA). Upon arrival you’ll see that there are a number of taxi companies located outside the airport. Whilst they won’t all charge the same rate, it’s important you discuss the price with the driver before departing. The Arubus bus service also stops outside the airport, travelling direct into Oranjestad. A great deal of car rental companies also operate in this airport. 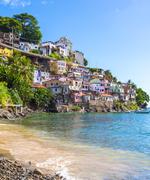